Why it’s awesome: Our Muay Thai Kickboxing classes are fun and intense. Come in and get an awesome workout with a mix of hitting the punching bag, solo drills, and drills with a partner. Get in shape and have a blast doing it. This is a mixed level class. Teens, men, and women.

Who its for: Adults wanting to take their training to the next level.

Our Muay Thai Classes Are For Everyone

Interested in learning Muay Thai? Come check out our program, this class is for all experience levels. Wether your just starting out or looking to sharpen your skills you have come to the right spot. Make sure to register for a free trial class today! 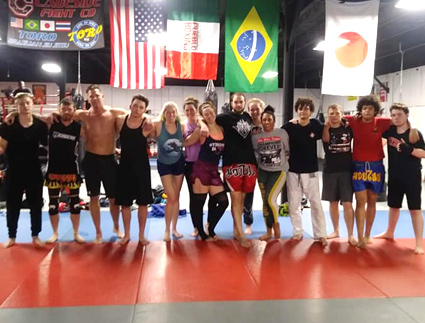 What is Muay Thai?

Muay Thai is referred to as the “art of eight limbs” or the “science of eight limbs”, because it makes use of punches, kicks, elbow and knee strikes, thus using eight “points of contact”, as opposed to “two points” (fists) in boxing and “four points” (hands and feet) used in other more regulated combat sports, such as kickboxing and savate.  A practitioner of muay Thai is known as a nak muay. Western practitioners are sometimes called nak muay farang, meaning ‘foreign boxer’.

Come check out our Muay Thai classes for FREE by click the button below!